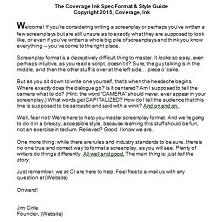 Screenplay work as a blueprint of a film used to guide directors, actors, and producers. You can download these templates which are suitable for your screenplay writing. You can also see a free short film script for students PDF and another script example for students which helps you to understand it easily.

Plugins are the heading of the scene which contains the location, time, and day of the scene. It looks something like this:

Sluglines contain locations whether scenes take place inside (INT) or outside(EXT. ). After the period the location of the scene,  Followed by the time of the day.

Subheader lines are used when you don’t need a new slugline but you need to change the place and time within the scene. If you are shooting within a college then a subheader is used to indicate a change in place and time.

Aamy stands on a path in conversation with hazel and robert.

Dialogues are the words spoken by each character. Capitalize the name of the character and write his/her dialogues underneath. You can see the dialogue script example to understand it more clearly.

Extensions are written in parentheses right after the character name. It tells the reader how the voice will be heard by the audience.

VOICE OVER(V.O): When a character speaks but is not heard by the other characters.

OFF SCREEN(O.S.): When a character speaks and can be heard by the other characters but the audience doesn’t see

INTO DEVICE: When the character speaks into the phone, radio, and any other device. You can see radio talk show scripts in which INTO DEVICE extensions are mostly used.

A Character is portrayed by the actors in the drama or movie. The character name or ID is always capitalized.

Parenthetical lines are used to give instructions to actors that how they should perform the lines. Here is an example of a parenthetical in the screenplay

ROBERT
(painfully)
What can I do for you?

It provides direction to the actors.

Shots are the jobs of the directors which indicates that the focus has changed within the scene. It is not important as a transition in screenplay format. Here are some examples of shoots:

Find below some movie script dialogue examples and screenplay format pages in order to start your screenplay writing in a quick way. 0 shares
You know, your single share or tweet will make everyone happy :)
×
Edit & Download
With our new Online Tool:
- Edit this template online in three simple steps.
- Download or print in PDF or DOC format.
- No need to manually edit the document on your PC.
- Share the final document with a simple URL.
- Manage all your downloads in one place.
Edit & Download in DOC & PDF
Download Now
Just download the template as shown in the image.
Download in format